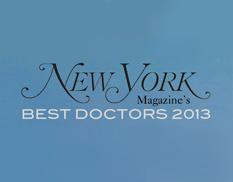 Hackensack University Medical Center is proud to announce that 51 of its affiliated physicians were listed in the latest edition of New York Magazine’s “Best Doctors 2013.” The magazine, in its sixteenth year, was provided a list of 1,198 doctors by Castle Connolly Medical Ltd., a New York City research and information company. Castle Connolly publishes an annual guidebook entitled “Top Doctors: New York Metro Area” with more than 5,650 of the region’s top physicians; however, space prohibits New York from publishing the full list and has selected 1,198.

“Congratulations to all of the New York Magazine Best Doctors,” said Robert C. Garrett, president and chief executive officer of Hackensack University Health Network. “With the extraordinary amount of excellent physicians in the New York metro area, we are honored to be home to many doctors who are so highly regarded by their peers.”

The New York Best Doctors 2013 is a non-ranking list of the top physicians in the region. It is a peer-nominated list that details information on more than 1,198 physicians. Nomination forms are sent to medical professionals in the region, including physicians and hospital executives. Nominators are asked to make a nomination based on which physicians they think are the best in their field, and to whom they would personally recommend a family member or loved one. New York uses a shortened version of Castle Connolly’s Top Doctors: New York Metro Area, which lists more than 5,650 physicians in 65 specialties.

HackensackUMC, a nonprofit teaching and research hospital located in Bergen County, NJ, is the largest provider of inpatient and outpatient services in the state. It is the flagship hospital of the Hackensack University Health Network, one of the largest health networks in the state comprised of 1,140 beds, nearly 10,000 employees and 2,200 credentialed physicians.HackensackUMC was listed as the number one hospital in New Jersey and one of the top three New York metro area hospitals in the U.S. News & World Report’s Best Hospital rankings for 2013-14. It also received 10 national rankingsin: Cancer; Cardiology & Heart Surgery; Ear, Nose & Throat; Gastroenterology & GI Surgery; Geriatrics; Neurology & Neurosurgery; Orthopedics; Pulmonology; Urology; and the Joseph M. Sanzari Children’s Hospital ranked as one of the Top 50 Best Children’s Hospitals for Neurology and Neurosurgery in the 2013-14 Best Children’s Hospitals list. HackensackUMC is among Healthgrades® America’s Best 100 Hospitals in 10 different areas – more than any other hospital in the nation, is one of Healthgrades America’s 50 Best Hospitals™ for seven years in a row, and received the Healthgrades Distinguished Hospital Award for Clinical Excellence™ 11 years in a row. The medical center has also been named a Leapfrog Top Hospital, and received 19 Gold Seals of Approval™ by the Joint Commission – more than any other hospital in the country. It was the first hospital in New Jersey and second in the nation to become a Magnet® recognized hospital for nursing excellence. HackensackUMC is the Hometown Hospital of the New York Giants and the New York Red Bulls, and remains committed to its community through fundraising and community events. To learn more, visit: www.HackensackUMC.org.