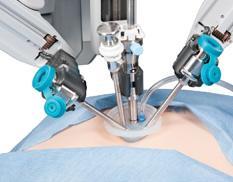 According to Dr. Pereira, this expansion of the single site platform is an important milestone. “I would describe this as the next level of robotic single incision surgery,” he commented.