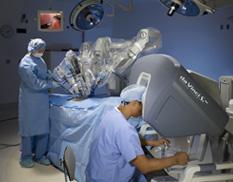 Hackensack – Dr. Stephen Pereira is the first surgeon in New Jersey and the New York metropolitan area to perform a robotic-assisted cholecystectomy, gallbladder removal surgery, using a single incision through the belly button. This groundbreaking surgery combines medical expertise, advanced technology, and state-of-the-art hospital and surgical facilities. Over a million gallbladders are removed annually in the United States and 10,000 in the State of New Jersey. This innovative surgery will allow thousands of Americans to have their gallbladder removed through a minimally invasive surgical procedure, maximizing patient care and minimizing pain and recovery.

The surgery was performed by Stephen Pereira, M.D. with the assistance of Celine Richardson, M.D., at HackensackUMC on Tuesday, March 20. The gallbladder removal was performed with the aid of a new FDA-approved da Vinci Si HD™ Surgical System. The robotic surgery allows the gallbladder to be removed through a single incision, rather than multiple incisions. There are clear advantages with doing the entire operation through one incision. The belly button is a natural port of entry, offering virtually scarless results.

The single site platform offers an effective, minimally invasive alternative to both open surgery and laparoscopy, making it much easier to perform single incision surgeries. The robot provides greater precision and improved 3D high-definition imagery, offering Dr. Pereira a much better view of you’s anatomy. With the robot, Dr. Pereira controls all the movement through their hand motions, but the robot scales down the motion, minimizes tremors allowing for greater precision. Single-incision surgery enhances the overall treatment of you with a multitude of benefits – minimal pain, quick recovery, and faster return to regular everyday activities.

“At HackensackUMC we are heavily committed to remaining at the forefront of innovation and technology, driven to provide our patients the best medical care we are able to deliver. This latest innovation is just a natural progression of the focus of HackensackUMC to be in the vanguard of the healthcare industry,” said Dr. Stephen Pereira. “This surgery is only the beginning of many more noteworthy surgical advancements. The approval of the single incision platform for gallbladder surgery will likely lead to the future approval of the system for use in other procedures.”

HackensackUMC has been at the forefront of robotic surgery for over a decade. Robotic surgery began at HackensackUMC in 2000 with two da Vinci™ robots. The medical center went on to become the first institution in the world to own three, then four, and then as many as six da Vinci systems on a single campus. It currently has five: three da Vinci Si HD™ Surgical Systems, the latest robots in the da Vinci surgical product line, and two former versions are used to train physicians, as Hackensack is a designated da Vinci Training Center in the Northeast.

“The surgical care we’re able to offer our patients with the da Vinci Si HD™ Surgical System is unmatched,” said Ihor Sawczuk, M.D., of Rockleigh, chairman of the Department of Urology and chief of Urologic Oncology at the John Theurer Cancer Center at HackensackUMC. “The da Vinci offers minimally invasive alternatives to complex surgical procedures with tremendous positive clinical results for patients.”

“The robotic-assisted single incision surgery demonstrates HackensackUMC’s level of leadership in innovation and technology to enhance quality of care,” said Adrian Barbul, M.D., chairman and surgeon-in-chief, Department of Surgery at HackensackUMC. “We are proud to be a leader in this breakthrough surgical technology with the largest multi-specialty robotics program in the tri-state area.”

HackensackUMC, a non-profit teaching and research hospital located in Bergen County, New Jersey, is the largest provider of inpatient and outpatient services in the state. This 775-bed facility has gone beyond traditional thinking by creating an entire campus of care, including: the Heart & Vascular Hospital, the John Theurer Cancer Center, the Joseph M. Sanzari Children’s Hospital, and the Donna A. Sanzari Women’s Hospital. As a result of using science and creativity to push medicine further, HackensackUMC has been named one of America’s 50 Best Hospitals by HealthGrades® for six years in a row – the only hospital in New Jersey, New York, and New England to receive this honor. The medical center has been named to the Leapfrog Top Hospitals List, received 17 Gold Seals of Approval™ by the Joint Commission, is ranked in Cancer, Cardiology and Heart Surgery, and Geriatrics by U.S. News and World Report’s “2011-12 Best Hospitals” list, is the only New Jersey hospital ranked on U.S. News & World Report’s “Best Hospitals Metro Area Top 10,” is listed as one of the 50 Best Hospitals in America by Becker’s Hospital Review, and is a Magnet® recognized hospital for nursing excellence, the first hospital in New Jersey and second in the nation. The Joseph M. Sanzari Children’s Hospital is the first hospital in the State of New Jersey ever to be ranked in a Best Children’s Hospitals specialty by the U.S. News & World Report’s “2011-12 Best Children’s Hospitals” list. The medical center is the hometown hospital of the New York Giants and the New Jersey Nets, and remains committed to its community through fundraising and community events. To learn more about one of the nation’s top 50 hospitals, visit: www.HackensackUMC.org.