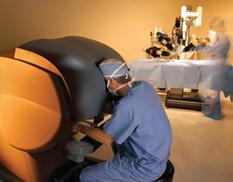 In 2000, when I began performing robotic surgeries, there were only 1,000 robotic surgeries performed worldwide. By 2011 there were 360,000 and in 2012, the number was up to 450,000. There are typically several direct patient benefits (when compared to traditional open surgery), including reduced bleeding, shorter recuperative hospital stays, less pain (which leads to reduced need for postoperative pain medication), and virtually scarless recovery.

A prostatectomy is one of the most common surgeries performed today in the United States. If you’re a man and are diagnosed with prostate cancer, there’s a very good likelihood that if surgery is recommended as the treatment for you—as opposed to radiation or other modalities—then robotic surgery will be the procedure you’ll have. It’s expanding in other areas, too, in gynecologic surgery, hysterectomies, and also in general surgery, which is my specialty—abdominal surgeries, intestinal surgery, gallbladder surgery.

The first robotic surgery the FDA approved for abdominal surgery was a very simple, primitive robot called the AESOP, which is an acronym for Automated Endoscopic System for Optimal Positioning. It is just a voice­controlled robotic device with a single arm for moving the scope for the surgeon.

The typical concept of what a robot is usually manifests in some form of an electronic machine with mechanical components that are controlled by an internal computer software system that functions autonomously without external control. From the surgeon’s perspective, this perception is incorrect when referring to robotic surgery. In today’s robotic surgery, the surgeon has complete control over the actions of the robot.

Vision: The surgeon views the surgical area through a viewer located on a console, which immerses the surgeon in a high­definition environment with visual resolution and sharpness that is greater than any previous imaging system. This is an advantage because the surgeon’s depth perception is markedly improved through binocular magnification.

3D Imagery: With robotic surgery, some of the benefits of doing open surgery, i.e., the binocular 3D vision adds to the dexterity of using your own hands, combined with the minimally invasive component of laparoscopy.

Also, with regards to imagery, last fall the da Vinci system added what it calls Firefly technology, an integrated fluorescence imaging capability. The surgeon is provided real-­time, image-­guided identification of key anatomical landmarks via ultraviolet imaging technology. A special fluoroscopic camera is integrated with the robotic laparoscope, allowing for the detection of ultraviolet, invisible light. The special dye then binds to plasma proteins in blood, which allows for visualization of hidden anatomic structures, determines blood supply and perfusion to organs, and identifies target structures and tissues such as lymph nodes. 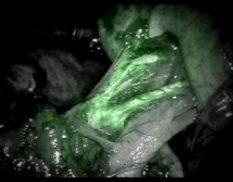 The surgeon is able to quickly switch back and forth between Firefly imaging and normal white light. Fluorescence imaging allows surgeons to see and assess anatomy better than the naked eye, further enhancing the unmatched vision, precision and control of minimally invasive da Vinci surgery.

So, to summarize, the main advantages the robotic surgery device provides for a surgeon are superior visibility with high definition, 3D imagery, improved dexterity, and greater precision during dissection.

Interestingly, the robotic system I use was originally designed with the assistance of a grant from the U.S. Department of Defense, which was interested in developing surgical robots to operate remotely on soldiers wounded on the battlefield.

I really see the issue from a much smaller scale. Consider that when laparoscopic surgery came to the forefront (around the time I became a resident), we saw a lot of skepticism. And today virtually no one would disagree that laparoscopy is better than open surgery.

With robotic surgery, I’ve seen firsthand various stages of advancement and improvement from the beginning, and it can only continue in that fashion. It will become increasingly more precise and scaled down with better imaging, and its just going to continue to improve.

For the fourth year in a row, Dr. Stephen G. Pereira has been voted “Top Doc” by New Jersey Monthly magazine.