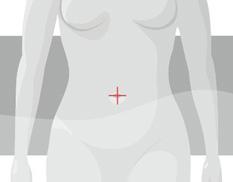 Alexis Grattan, a banking professional from New Jersey, spent a great deal of time online doing research prior to having her gallbladder removed in March of 2013 at Hackensack University Medical Center (HackesackUMC). At 33, she knew she was going to spend the rest of her life looking at any scars left behind, so she opted for robotic gallbladder removal surgery using a single small 1-inch incision through the belly button — as opposed to four cuts in conventional laparoscopic surgery.

“I SEARCHED ONLINE ABOUT THE DIFFERENT TYPES OF SURGERIES TO REMOVE A GALLBLADDER, THEN I READ ABOUT THE PROCEDURE INVOLVING A SINGLE INCISION.”

Alexis shares: “I had two very severe gallbladder attacks in the middle of the night, and not knowing what it was I thought that it was just heartburn, struggled through the pain, and it passed after a few hours.” Having never experienced a heartburn attack before, Alexis took action. “After the pain subsided, I went to see my primary care physician, who subsequently sent me for an ultrasound to see what was happening,” she added.

Alexis’ test results showed gallstones, and her doctor recommended gallbladder removal at some point in the near future. “I searched online about the different types of surgeries to remove a gallbladder, at first all I saw was conventional laparoscopic, then I read about the procedure that utilizes the minimally invasive da Vinci Surgery device which enables surgeons to operate through a single incision, as opposed to multiple incisions that are used in conventional laparoscopic cholecystectomy.” 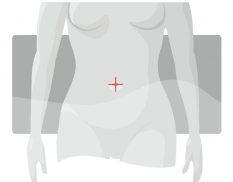 The virtually scarless results were a major factor in her decision to pursue single incision robotic surgery. Also, Alexis technically works at what could be termed a “desk job”; however, the fact is, she is up and moving around all day long greeting people and assisting in the daily operations of the bank. This meant that it was imperative that the operation and the recovery went smoothly. Alexis happily informed us that just one week after the operation, she was back at work.

Dr. Pereira is one of the first doctors in New Jersey to have performed robotic surgery and the first surgeon in the New Jersey/New York metropolitan area to perform robotic single incision gallbladder removal. By comparison, performing cholecystectomy with traditional laparoscopic surgery requires four incisions in the abdomen. Robotic single incision gallbladder surgery provides enhanced dexterity and visibility for the surgeon and patients benefit from minimal pain, rapid recovery, and virtually no scars.

For further information and to learn if you are a candidate for robotic surgery, please visit laparoscopicsurgerynj.com or call (201) 343-3433.

For the fourth year in a row, Dr. Stephen G. Pereira has been voted “Top Doc” by New Jersey Monthly magazine.